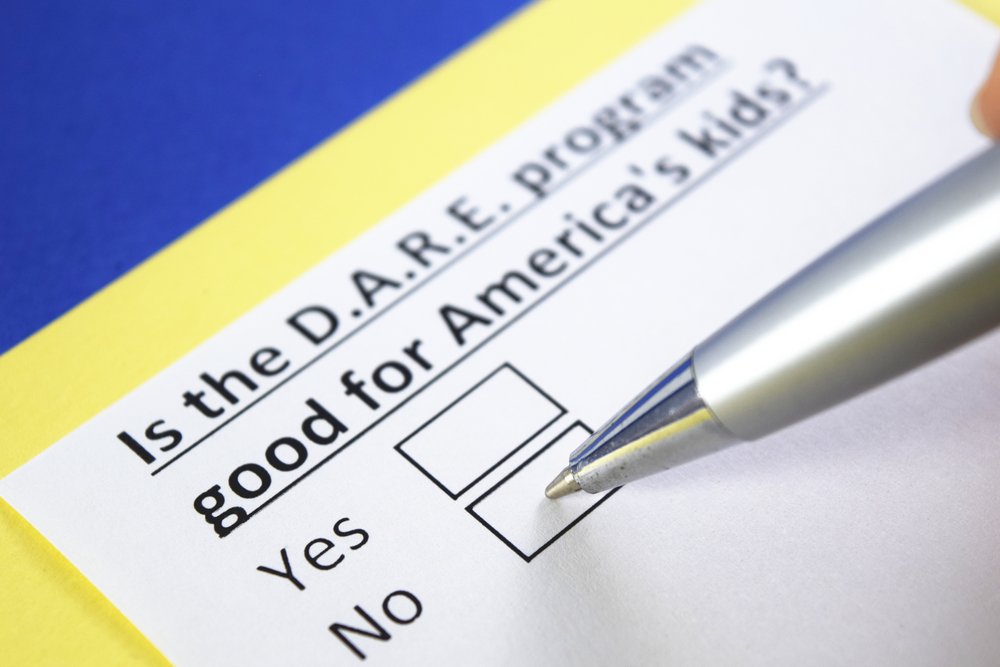 Just saying “no” wasn’t enough to stop kids from doing drugs and alcohol.

The Drug Assistance Rehabilitation Education, or D.A.R.E., program debuted to great fanfare in 1983. D.A.R.E. was a series of classroom lessons designed to be taught by police officers. The lessons focused on teaching children about peer pressure and the negative effects of drug abuse. The program started as a partnership with the Los Angeles Police Department and the Los Angeles Unified School District to give kids the tools needed to avoid involvement in drugs, gangs, and violence. D.A.R.E. received widespread political support because it put police officers in the spotlight and focused on children, according to research conducted by The Washington Post.

Despite receiving millions of dollars in funding and being implemented at more than 75% of schools nationwide, the D.A.R.E. program failed to live up to its promise. While it was an effective strategy for curbing tobacco use, a meta-analysis of all of the data on the program conducted by the Research Triangle Institute in 1994 revealed that D.A.R.E. had minimal impact on the rate of teen drug use.

Police officers tasked with teaching the D.A.R.E. curriculum had to complete extensive training before heading out into the classroom. Experts believed law enforcement officers could bring their experience on the ground fighting the war on drugs to help prevent young people from trying illegal substances. Officers came to the schools and often lectured students in a question–and–answer-style format. Unfortunately, research suggests the traditional teaching style of the program is not as effective as one that incorporates interactive learning and places emphasis on social and general competencies. D.A.R.E. also focused its program on elementary-age children, and new research indicates programs at the middle-school level have a higher success rate. The most effective drug prevention programs teach drug–resistance skills. These programs help adolescents learn general personal and social skills they need to know how to respond when confronted with an illegal substance at a party or with friends.

As more studies came to light questioning the program’s efforts and its funding slowly dwindled, D.A.R.E. decided to make some positive changes to improve effectiveness. In a bid to fix the program and stay relevant, D.A.R.E. debuted a new strategy with its “keepin’ it REAL” program for middle school students in 2008. The program was developed by Pennsylvania State University with support from the National Institute on Drug Abuse, utilizing rigorous longitudinal scientific evaluations to create this evidence-based program.

“Keepin’ it REAL” consists of 10 45-minute lessons with five videos. The program describes itself as using a “from kids… through kids… to kids” approach. All the lessons, including role-play scenarios and decision-making applications, are based on the stories of real teenagers. A 2016 report from the U.S. Surgeon General determined interventions like “keepin it REAL” for adolescents aged 10 to 18 affect either the initiation or escalation of substance use by giving kids the social, emotional, cognitive, and substance refusal skills needed to prevent drug use.

Together for Resilient Youth is another program designed to prevent substance abuse among youth. Rather than focusing on schools, T.R.Y. strives to reduce community risk factors through advocacy, education, mobilization, and action to reduce the risk factors that lead to drug abuse.

Talk It Out NC Helps Parents Start the Conversation

Just telling your children to say “no” to alcohol is not the answer either. Similar to D.A.R.E.’s updated program, Talk it Out NC encourages parents and the parenting community, including educators, counselors, mentors, community leaders, to talk to their children openly about the risks and consequences of underage drinking. Nearly two-thirds of teens know people around their age who have tried alcohol, and about 10% of 12-year-olds have had a drink, Talk it Out NC reported. Talking to your children and young adults about the consequences of underage drinking will give them the tools they need to make positive decisions about not drinking alcohol underage.

Research reveals parents want to be prepared to talk to their kids about underage drinking and children will listen when their parents discuss important issues openly. Talk It Out’s goal is to provide parents with real information to foster honest discussions.